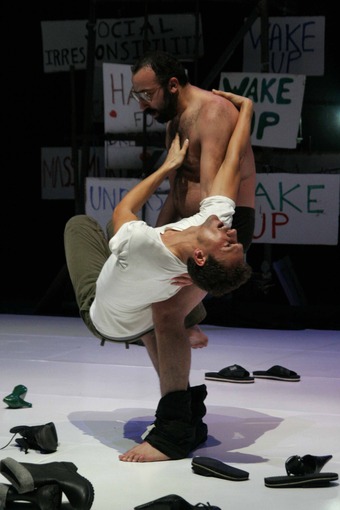 Concerto 13 / 2nd Movement discusses the theme of authority and control in a country that was torn by Civil War and is still undergoing political instability. The work is based on a collage of different images and situations that came out of the work process. Themes that dealt with Media, war, gender, love, religion, and cultural differences were contextualized to fit in one thematic context. “Authority” as the main theme of the work imposed itself on all the above themes and thus the work could be seen as a ‘statement’ rather than a presentation of ideas. It is a statement against Media control, religious brainwashing, and political realities.

In Concerto 13 / 2nd Movement, two dancers from the Netherlands and one dancer from France came to Beirut to work with a musician, a performer and a choreographer from Maqamat Dance Theatre. For a five week period the whole group worked in Beirut at Maqamat’s studio Before presenting it during the Autumn Dance Festival in Beirut. The whole group went then to The Netherlands and worked for 2 weeks at the Grand Theatre in Groningen (co-producer of the work) before premiering it in the ‘Dancing on the edge” festival  (co-producer) in Groningen, Amsterdam and Rotterdam.   \


During all this period Film maker Ruben Gischler followed the dancers in Beirut and also during their stay in the Netherlands. Ruben created a documentary about this whole experience of work.

It a Lebanese/Dutch collaboration that was presented during the “Autumn Dance Festival” in Beirut and at “Dancing on the Edge Festival” (co-producer) in Holland at the Grand Theatre, Groningen (co-producer), Frascati,( Amsterdam), and Rotterdamse Schouwburg (Rotterdam). The performance in Beirut is funded by DCCD

For more information on the work: www.omarrajeh.com
cast and credits