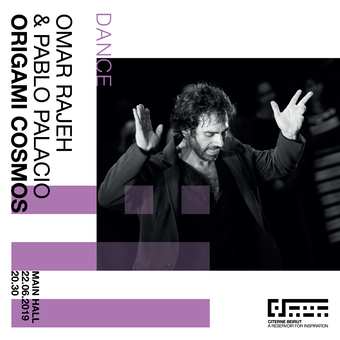 A process of ‘Folding, unfolding, and re-folding’, A process of virtual possibilities for physical becomings. Omar Rajeh borrows the title for this performance from French philosopher Gilles Deleuze and sets it as a basis for a mesmerizing and non stop journey of images and meanings. Accompanied by an innovative & technological approach to sound and composition, both worlds of sound and movement expand beyond their own limitations and frames.

Pablo Palacio is an independent composer currently living in Madrid. His pieces have been performed in many countries and edited by the label Sub Rosa in Anthology of Noise and Electronic Music. He is also an active composer for dance and performing arts. He has divulged new perspectives and technologies in sound composition and interactive music through publications, workshops, and talks in several conservatories, universities and institutions such as University of Genoa (Italy), International Computer Music Conference (ICMC), Missouri State University (E.E.U.U), or International Symposium of Movement and Computing (MOCO). He co-directs Instituto Stocos, a project focused on the analysis, research and development of the interaction between body gesture, music and interactive visual imagery, integrating in a performative context abstractions taken from other disciplines such as artificial intelligence, biology, mathematics or experimental psychology, participating in pioneering European research projects such as WhoLoDancE, Metabody, and D.A.N.C.E.

For more information about the work: www.omarrajeh.com