a creation by Omar Rajeh 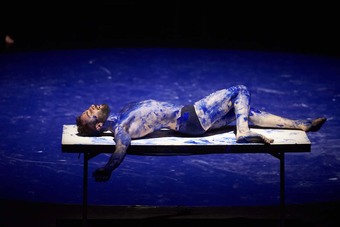 “Omar Rajeh is the most famous choreographer from the Arab world.  ( …) "#minaret" in Dresden combines his strengths: powerful movements and a political connection.”
Deutschlandfunk Kultur - Elisabeth Nehring in conversation with Andrea Gerk
#minaret

For nearly 1,000 years the minaret of the Great Mosque of Aleppo soared above Syria's largest city. It now lies in ruins.
The once existing 'monument' represented the city's soul. A monumental portrayal of the cultural, the social, the historical and the religious, it stood witness to countless generations of gatherings.
With an eclectic range of artists, #minaret proposes a core question of our everyday life. How do we position ourselves, resist ‘numbing’, and face the images of destruction and confiscation of entire cities and the daily violation of human intimacy and privacy?