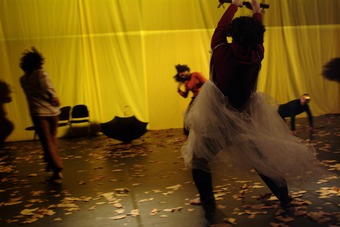 Beyrouth Jaune is the first dance performance created by Omar Rajeh for Maqamat in Beirut in January 2002, at 'Theatre de Beyrouth'. Its success allowed for local and international touring for the company and it played a big role in opening possibilities for further development on the local contemporary dance scene. For Rajeh the performance of 'Beyrouth Jaune' is a historical moment for the establishment and development of a contemporary dance scene in Lebanon.

The performance focuses on and highlights many problems facing the youth generation of Lebanon. It deals with issues such as education, political and sectarian racism and the inability to fulfill future dreams. The theme is presented in a stylized way sometimes ironic others serious and dramatic. It is a performance with very powerful physical ability that draws upon personal and intimate issues.