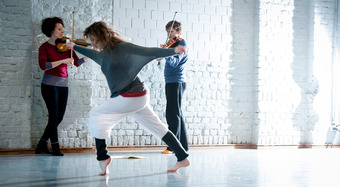 When two choreographers, who, until now, had both primarily sought to explore the moving questions of their time, turn to a string quartet whose basic principles had been conceived in Central Europe almost 250 years ago, they are entering completely new territory in spite of or even because of all choreographic and musical tradition. For the question of how contemporary dance and music – whether modern or classical music – can come together has not been answered by any means. Does dance necessarily have to follow the music and it, in turn, the score, which itself is beholden to the composition? What does it mean to follow? In their first joint project, Cologne-based choreographer, Stephanie Thiersch, and Beirut-based choreographer, Omar Rajeh – together with the award-winning Asasello Quartet from Cologne – adventurously yet sensitively encourage unexpected encounters and poetic collisions. The result is two mutually complementing and mutually challenging attempts at choreographic and musical collisions that offer various answers to similar questions under the same test conditions (a highly professional string quartet, three contemporary dancers, the various origins and ancestry of all the participants, a three-sided, open, empty room):
The interruption of a settled and peaceful condition, Omar Rajeh’s choreography starts with the idea of an encounter, an accident, and an unexpected disruption that shifts our perception. A meeting in the sense of a collision, a new departure point, created through an unplanned and unexpected series of events. The piece confronts us with the transformation and shifting of an original music score by Mozart. It evokes questions as to what is ‘original’ and what is ‘transformed’, highlighting this fine line between dance and music, movement and sound, classical and contemporary.

Stephanie Thiersch devotes herself to the tonal, but also the theatrical-choreographic qualities of the string quartet, and dares the greatest-possible mutual convergence of dancer’s, musicians’ and acoustic bodies. Musical and physical resonating spaces are jointly explored – adventurously balanced between surrender and the preservation of irreconcilably distinct qualities. Dance audibly becomes music; the motions of the musicians a visible choreography, and the position of the unseen conductor, director and sound choreographer repeatedly placed at disposal. Moreover, through the very subtle modern music – which is often divided into minute musical transitions and evades every cliché of danceability – combined with humorous seriousness, the piece challenges more than just our sense of hearing that has become so accustomed to urban noise.
For more information on the work: www.omarrajeh.com
performance dates and touring