That Part of Heaven 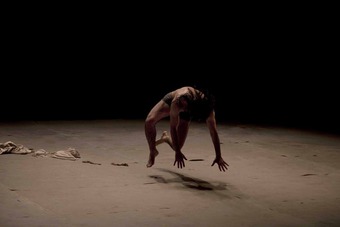 That Part of Heaven is an exploration in 'physicality'. The performance starts from the idea of the 'event', which strongly leaves its mark on our bodies; the virtual image in our mind that changes, through time, and grows into a physical weight. It deals with movement as a resonance of the body in its virtual possibilities and 'becomings' seen all in one frame.
Maqamat, based in Beirut, uses its cultural and social environment to enrich its artistic research. The work strongly relates to the Aftermath of the Lebanese Civil War and its affect on the body.
For more information on the work: www.omarrajeh.com performance dates and touring

Maqamat Dance Theater is supported by The Norwegian Embassy in Beirut