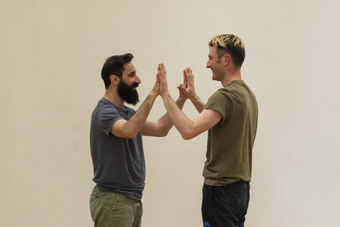 Incontro
BASSAM ABOU DIAB | Lebanon & JACOPO JENNA | Italy
Residency: April 2018
First showing: Moultaqa Leymoun within BIPOD 2018
This first residency took place within the framework of the Italian artist residency program that is being hosted by Maqamat Beit El Raqs in collaboration and with the support of MiBACT and the Italian Ministry of Culture and the Istituto Italiano de Cultura in Lebanon. The work has then been developed at FabbricaEuropa in Rome, who also supports the project and will be premiered in 2019.

"The relation between me and Bassam is really fresh on stage but physical in the same time. We started form the idea of a fake lecture performance transformed in a choreographic field, playing with some stereotypes of Arab and EU culture relating with a mix of different videos, creating a sort of filter of our gestures."
Jacopo Jenna about the work.
performance dates


Bassam Abou Diab is a theatre graduate from the Lebanese University and a folklore and contemporary dance artist. He has been dancing with Omar Rajeh (Maqamat) for several years. He performed in Mushrooms and Fig Leaves, Hibr, That Part Of Heaven and Watadour. Bassam was also part of the intensive dance training program Takween in 2010 and 2011, then 2017 where he worked with choreographers such as Marcel Leemann, Emilyn Claid, Thierry Smith, Hooman Sharifi, Benoit Lachamre, Marco Cantalupo, Gilles Jobin, Kristina De Chatelle, Damien Jalet, Franceso Scavetta and Nacera Belazza just to name a few.  In addition to his theatrical work, Bassam is currently touring his latest creation, “Under the Flesh”. Bassam is an associated artist with Maqamat and supported by Maqamat and APAP for the project APAP 2020.
Jacopo Jenna is a choreographer, performer and filmmaker creating stage works, video pieces, and installations. The works are oriented towards research concerning the perception of dance or choreography as an extended practice. As a graduate of Sociology, he also studied dance in Codarts / Rotterdam Dance Academy. In Europe he has worked for several years as a dancer and performer for a number of companies and choreographic research projects. He presents his works internationally and continues to develop projects with visual artist and musician.