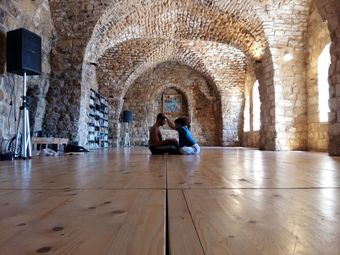 Charlie Prince & Hoor Malas, two artists of MOULTAQA LEYMOUN will be resident artists at the studio of Maqamat Beit El Raqs situated at Institut Francais Deir El Qamar from the 4th until 23rd of July 2017.
OPEN STUDIO Saturday 22 July, 2017 at 11 am

CHARLIE PRINCE | LEBANON
Born in Lebanon, Charlie is a dance artist currently based in Amsterdam. As a performer, Charlie has danced with Ballet BC in Vancouver and Compagnie Alias in Geneva. He is currently working as a freelancer in Europe and as a guest artist with Compagnie Marie Chouinard in Montreal. Charlie will be presenting his first solo work Beit Jissmi this year in Europe; this piece addresses the body as a home, as a refuge for memories and dreams which in turn shape the body both internally and externally.

HOOR MALAS | SYRIA
Hoor Malas is a Syrian contemporary dancer and choreographer. She participated in various dance workshops with companies and artists from across the globe including in the US, UK, France and Denmark. She is a co-founder of Sima Dance Company in 2006. At the age of 23, she became a teacher at the Higher Institute of Dramatic Arts where she continues her career up till now.


This residency is part of the MEEM project/funded by SouthMed CV & Apap - Performing Europe 2020 international Network.