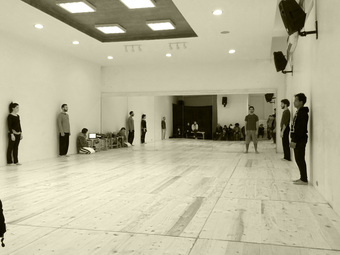 This first residency of BEYTNA(our home), which is a collaboration between Anani Dodji Sanouvi, Hiroaki Umeda, Koen Augustijnen, Omar Rajeh, and Le Trio Joubran, will take place at Maqamat | Beit El Raqs from the 6th - 26th of July 2015.

There will be a first presentation of the outcomes of these three weeks of work. International presenters and co-producers are invited to attend this presentation. For more details please contact us at info@maqamat.org


The work is a collaboration between Anani Dodji Sanouvi, Hiroaki Umeda, Koen Augustijnen, Omar Rajeh,  and Le Trio Joubran. It will premiere at Tanzquartier Wien on the 8th & 9th Of April 2016

We are still looking forward for more partners to join the production and for residency dates in December 2015. Individual donations and sponsorships are mostly welcome. If you woudl like to support this unique collaboration please contact us.

Togolese dancer and choreographer Anani Dodji Sanouvi has been hailed for his ability to assimilate different traditions into his own dynamic style. His creations have toured Europe, the United States, the Middle East and Africa. Anani is Dance Laureate of the prestigious ‘Rolex Mentor and Pro- tégé’ Initiative and has worked and collaborated with artists such as Peter Sellars and Anne Teresa De Keersmaker. Recently Sanouvi took part of the event “An Unique Gathering” that brought together 7 young talents for an exchange with William Kentridge, Peter Sellars and Wole Soyinka in Cape Town. Besides Africa center has awarded him with a research residency at Sacatar Foundation (Brazil) where: he presented a short solo at the Museum of Contemporary Art of Bahia, laid the ground for new works and started the remake of “Music for Pieces of Wood”, a duet that he considers to be a cornerstone of his work and which he choreographed with De Keersmaeker. “My heart is deeply in all that concerns the knowledge of traditional elders from Africa and abroad,” he says. This sense of heritage permeates his art and forms his sense of responsibility as an artist, leading him to develop a method for teaching and making contemporary art –called AgamaFo – that is rooted in the knowledge and spiritual practice of animism. In this context, Sanouvi besides his creations, has been giving lectures and teaching internationally as well as collaborating with institutes such as Maquamat Dance Theatre and the Kôré Cultural Centre in Mali. In future he plans to implement a cultural program and an arts laboratory in Togo titled ‘The Tools of the Wisdom’.

Hiroaki Umeda is a pluridisciplinary artist: choreographer, dancer, sound, image and lighting designer. His work is both minimal and radical, subtle and violent, and very much in touch with his contemporary Japanese roots. In 2000 Hiroaki Umeda founded his company S20 and has performed many of his dance pieces throughout the world. Hiroaki Umeda currently lives and works in Tokyo.

“bâche” (2004) brought him an international breakthrough, followed by “IMPORT/EXPORT” (2006), “Ashes” (2009) and “Au-delà” (2012). Since 2013 he’s working freelance and directed in Australia a dance solo for Dalisia Pigram of the Marrugeku Company called “Gudirr Gudirr”. In september 2013  he opened with a piece for 10 Palestinian dancers called “Badke” produced by KVS, Les Ballets C de la B, and A.M. Qattan Foundation.

Apart from Les Ballets C de la B he often joins forces with theatre companies. As with Ivo Van Hove (Toneelgroep Amsterdam), Toneelgezelschap STAN and Chokri ben Chika to name but a few.

Omar Rajeh, choreographer, dancer, and artistic director of Maqamat Dance Theatre. His work, intense and powerful, has made an essential and significant contribution to the establishment of a contemporary dance scene in Lebanon. He established his company in Beirut in 2002 and since then he has toured throughout the Arab World and Europe, in addition to Canada and Korea. His artistic work deals with social and political issues inspired by the everyday life of the city of Beirut where he lives. It is very significant in his work that he is continuously questioning the individual presence and the physicality of ‘the body’ within a socio-political and human context.

Maqamat/Omar Rajeh founded BIPOD, one of the most important platforms for contemporary dance in the Arab World. Through Maqamat he also initiated many projects that similarly prompted the company to play a major role in the establishment and development of a contemporary dance scene in Beirut and the region.

Rajeh is also the co-founder of Masahat Dance Network, a regional dance network in Lebanon, Syria, Jordan, & Palestine, founder of Leymoun – Arab Dance Platform and of Takween – intensive training project for Lebanese and Arab young dancers in partnership with Sasha Waltz and Guests. Omar Rajeh has started a significant and important project tilted ‘Maqamat Beit El Raqs’, a dance space for training, dance presentations and residencies situated in the Chouf Mountains of Lebanon and outside the Capital.