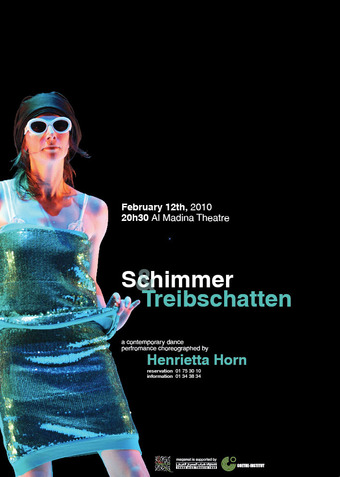 Henrietta Horn is all by herself and her critical, but far from humourless approach to questioning her art is gradually turning into an obsession that keeps assuming new shapes. In “Schimmer”, it is not just the costumes, but the colours, too, that determine the concept of motion. In “Treibschatten” it is dance itself that breaks through, that keeps trying, that changes again and again in the square space and seems to take on a life of its own, again and again. Like an obsessed person, Henrietta Horn submits to the law by which she started out for a long time.


Henrietta Horn was artistic co-director of the Folkwang Tanzstudio in Essen with Pina Bausch from 1999 to 2008. Just before she retired from this position, she was awarded the “Künstlerinnenpreis des Landes NRW im Bereich Choreographie / Zeitgenössischer Tanz” (North Rhine-Westphalian Female Artists’ Prize for choreography / contemporary dance).
She has worked as a freelance dancer and choreographer since October 2008
The performance in Beirut was supported by the Goethe Institute