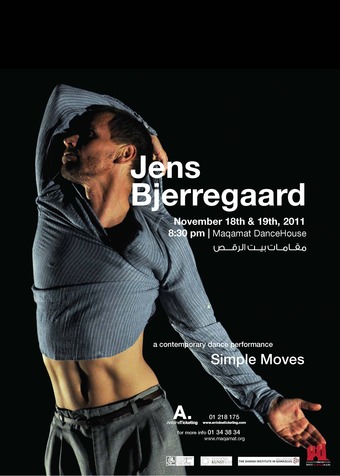 Jens Bjerregaard was trained in dance and choreography at the Laban
Centre of Music and Dance, London (1989-1992). He made his debut as a choreographer in 1995 and In 1998, he established, with a group of dancers, the award-winning experimental dance ensemble Urban Elves; and founded Mancopy Dansekompagni, in 2005. In 2007 he founded Archauz, the first Choreographic Centre in Denmark. he has been teaching workshops at festivals around the world, created
international outreach programs and has been jury member on several international competitions.
About the performance
Although rather metaphysical, the concept and movement composition of “Simple Moves” are of a biographical origin.Three collaborating artists were invited, each with one part of the performance. The collaborations reflect on important turning points in the life of Bjerregaard. They each bring a different angle to the work and challenge the dancer with new [Simple] moves. The encounter with the audience thus becomes not only with the dancer but also with the person.
performance dates

The Performance is supported by the the Danish Arts Council and The Danish Institute in Damascus.
Thank you to Maqamat Dance House and the Danish Embassy in Beirut.