Reproduction | Dance for Nothing 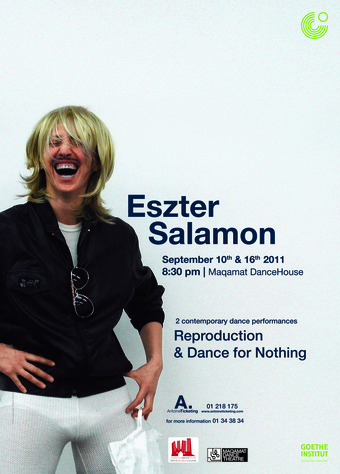 Eszter Salamon is a choreographer, dancer and performer living in Berlin. She studied classical ballet at the National Dance Academy of Budapest and Hungarian folk dance. Since 2001, she creates and presents her work internationally in dance and performing arts venues and festivals in Europe, Asia, USA and South America. Beside movement, she is using voice and music as well as documentary and ctional narration as choreographic extensions in her work." www.eszter-salamon.com

In Dance for Nothing, Eszer Salamon performs John Cage’s music, "Lecture on Nothing” (1949) and simultaneously dances with the aim of creating choreography of movements to be juxtaposed to the text piece. The idea of using music done by words and performing a parallel action as another temporality follows the desire for interaction with non-interference. “The dance in ‘Dance for Nothing’ should be autonomous and never become an illustration or a commentary on the text.” (Eszter Salamon)

In "Reproduction" . Eszter Salamon revisits her work (2006) It is a residency project with local and international performers at the Maqamat DanceHouse in partnership with the Goethe-Institut. The choreography shows in a very brilliant, let's say «tender-troubling » way, the scores of gaze-regimes. As a reection on how we constitute bodies merely by perceiving them in a certain manner, this work generates floating bodies, which can no longer be xed to one single identity. The main score consists in repetition and a simple formation of bodies, accessories, costumes, motion and touch. But while reproducing scenes of intimacy, scenes of touch, scenes of love, and letting them last, the (voyeurist) audience assists another spectacle, which disfigures the physical borderlines we used to see. performance dates